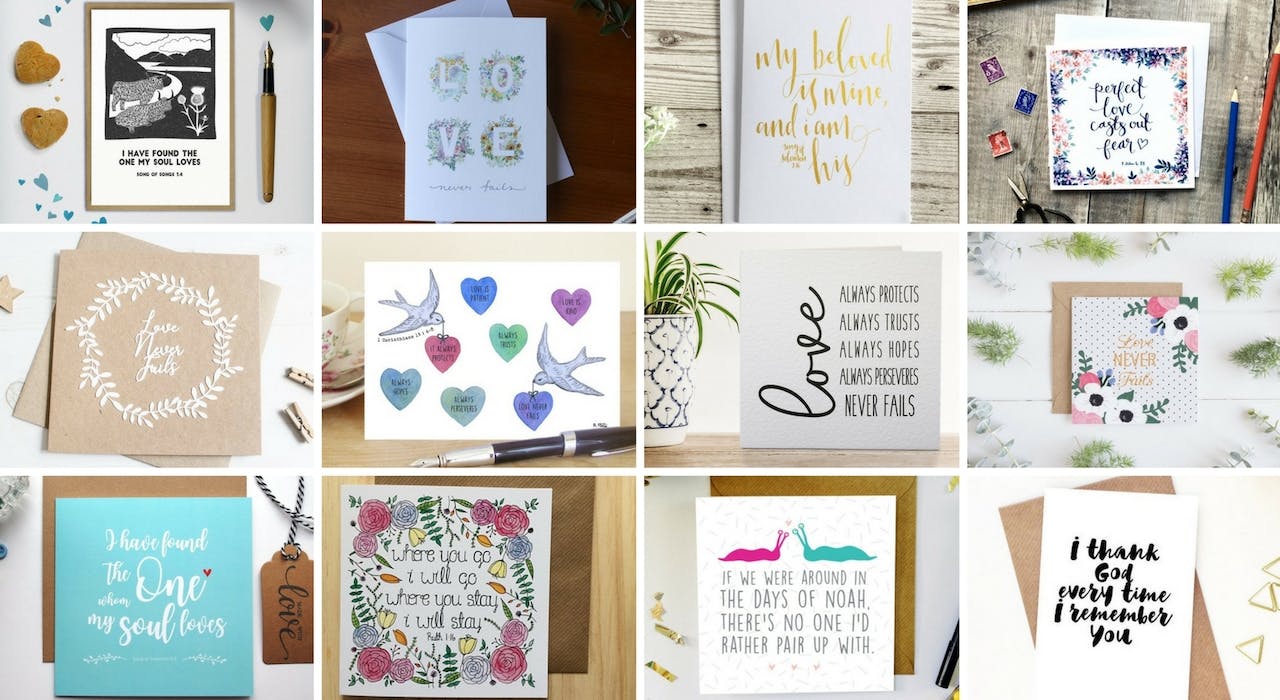 Whether you're a die-hard romantic who seizes any excuse to wax lyrical to the love of your life, or you're more of a pragmatist who doesn't need a commercialised holiday to show how you feel, the truth is that Valentine's Day is a great excuse to spread a little bit of joy among our nearest and dearest.

Filling a greetings card with some of your favourite things about somebody can be a lovely way to bless them, and is perfect if you feel awkward expressing your feelings for them verbally (whatup, my British homies).

Sending cards became popular in the early 19th century as printing processes became more effective, and the introduction of the postage stamp made it easier to send greetings to people far and wide.

The impact of the internet on letter-sized mail

The internet is blamed for this, but interestingly the number of parcels has increased substantially! No surprise really, given how popular online shopping is. If you're a bit of a stats geek like me, you can check out the report here.

Uh, why should I care?

Nowadays, we chat to each other on Facebook Messenger, Instagram DMs, and WhatsApp, but we don't tend to send (or receive) any letters -- it's time consuming and we're all so busy, right? But it means that unless we've had an online shopping spree, we don't get very much happy mail!

A second-class stamp costs 56p, which is basically the same price as a Freddo nowadays, and you can buy a greetings card for anything between £2-£3.50.

I know I'm not the only one who LOVES getting surprise notes in the mail -- they make such a delightful change from letters from the bank and threatening notes from the TV Licensing people who just can't seem to understand that we don't have/watch TV...

So why not use Valentine's Day (or Galentine's Day, or Palentine's Day...) as a reminder to send a friend some surprise encouragement in the post? At the risk of using a cliched comparison: for the cost of a sassy hot chocolate. I'm talking cream, marshmallows, the lot.

Here's a round-up of some of our favourite Christian Valentine's Day cards -- lots of them are suitable for sending to a friend or a loved one, because we're called to love one another as Jesus loves us. 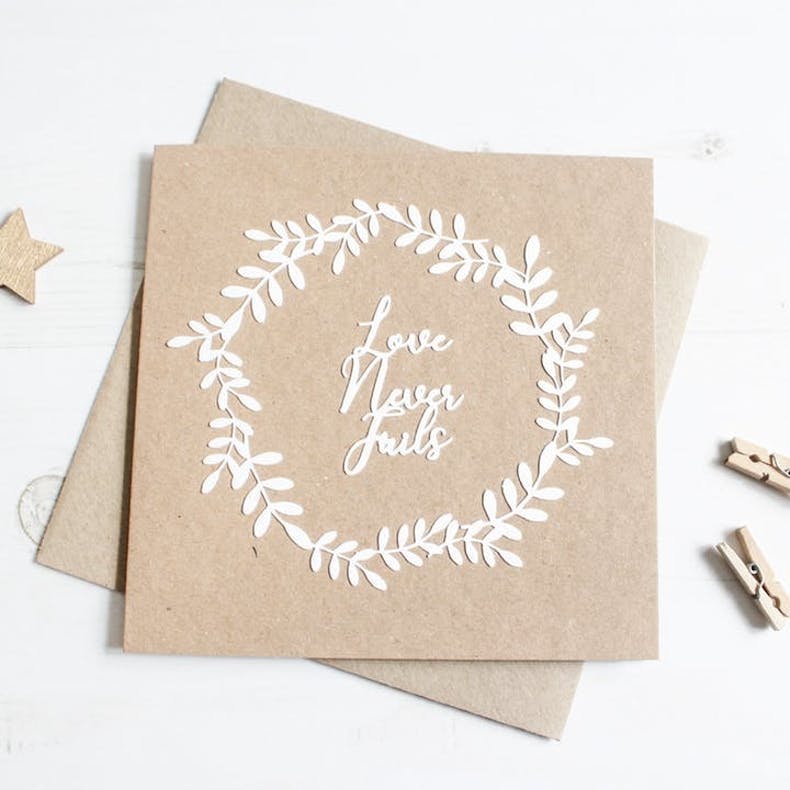 The words "Love never fails" are surrounded by a leafy wreath in this paper-cut design by Karen at Kiwi Tree Designs. The white paper-cut design is individually cut out for each card, before being mounted on a kraft greetings card. It's a stunning design which would look beautiful popped in a frame to decorate a wall or shelf. 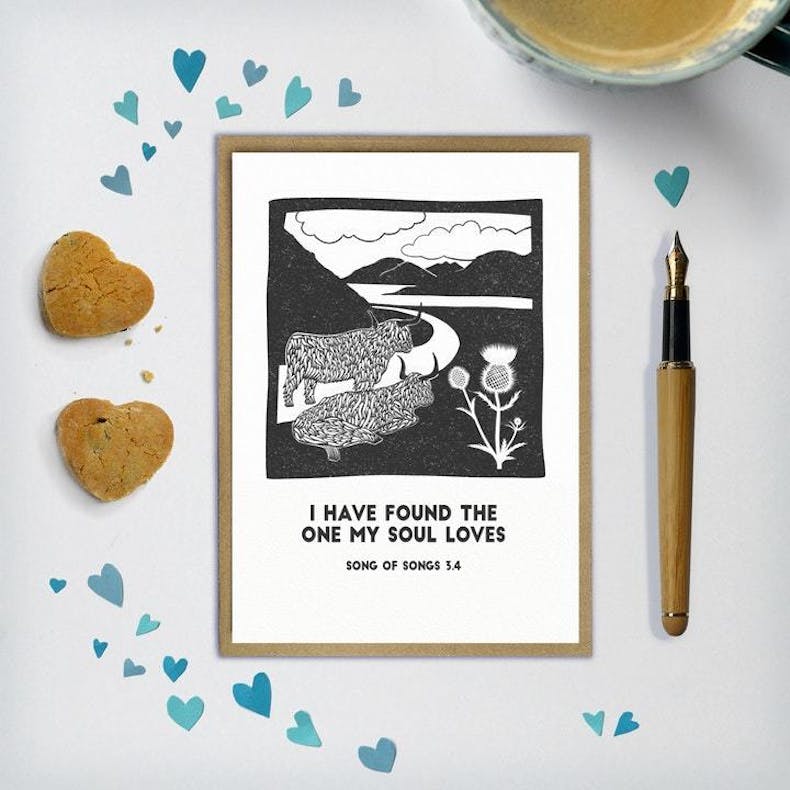 "I have found the One my soul loves."

This verse from Song of Songs is probably one of the top favourites for Christian wedding cards and anniversary cards. Rob and Naomi, the dream team behind Frog and Gnome, have created this beautiful monochrome card which was originally a paper cut design they created for a friend's wedding. It features a pair of highland cows set in (presumably) the bonny hills of Scotland, and captioned with the words from Song of Solomon 3:4. You can also order a personalised version of this with your chosen pair of names and a memorable date. 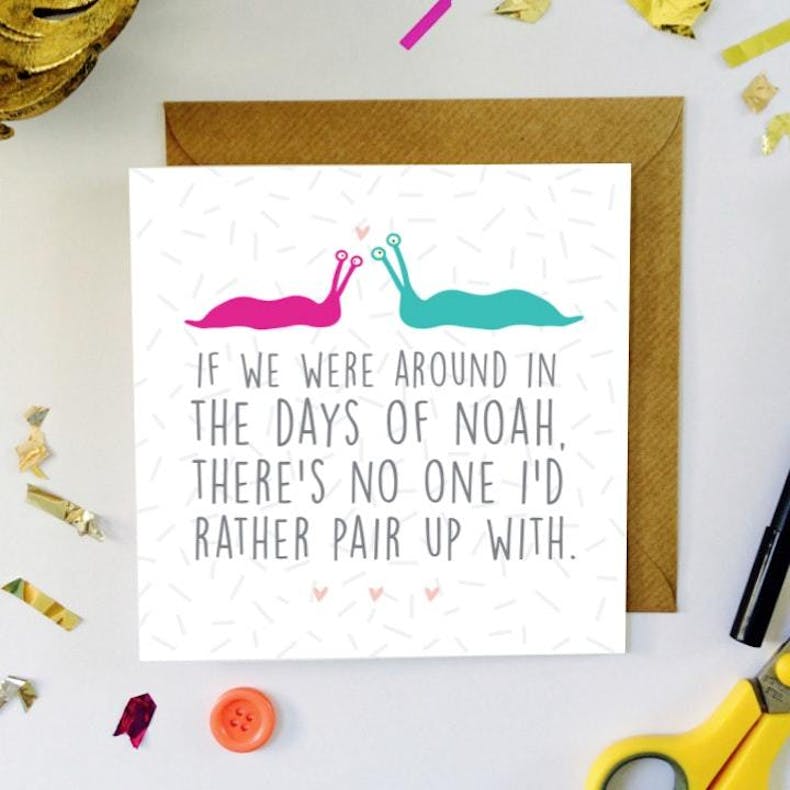 Another incredibly popular design from our events in 2017, lots of you found this humorous range from Ooh I Like That Design incredibly funny. This card is inspired by the story of Noah's Ark, and is sure to bring a smile to the face of your bae. 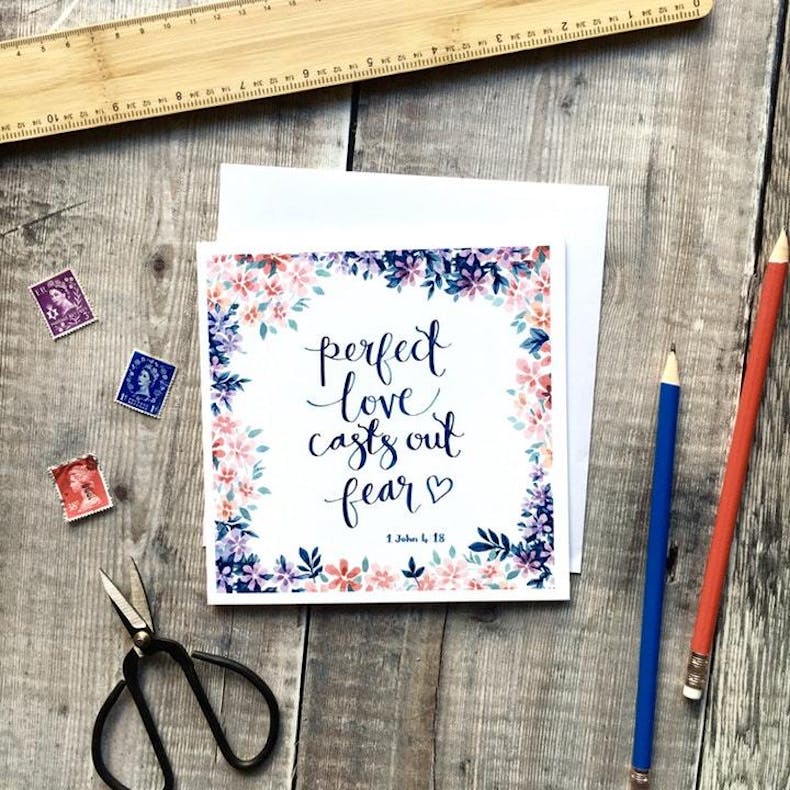 "There is no fear in love, but perfect love casts out fear. For fear has to do with punishment, and whoever fears has not been perfected in love."

This card is a great option for sending to your friends and family -- we have nothing to be afraid of when we're in Christ, because through His perfect love for us, He has conquered sin, darkness, and the grave. A great reminder for anyone who struggles with anxiety and fear! This card by Izzy and Pop features the words of 1 John 4:18 surrounded by watercolour illustrations. 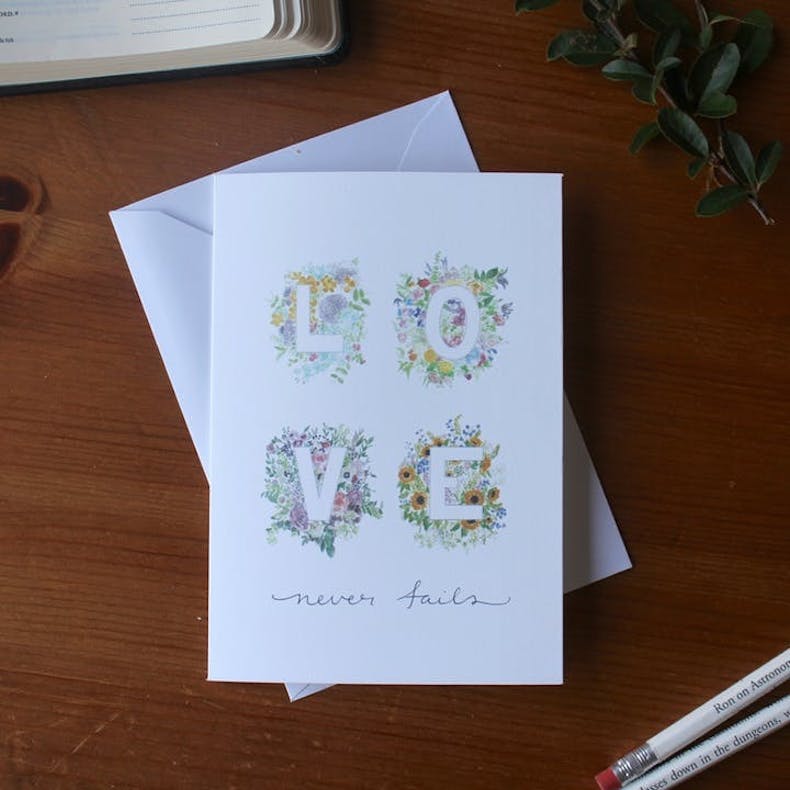 Zoe, the illustrator behind Zoeprose, spent much of last year creating the most stunning floral alphabet. Each letter is completely unique, featuring blooms you would typically find in an English garden. Since finishing the series, she's created a range of beautiful products that use these floral letters, including this "Love never fails" card inspired by the Bible passage 1 Corinthians 13:4-8. 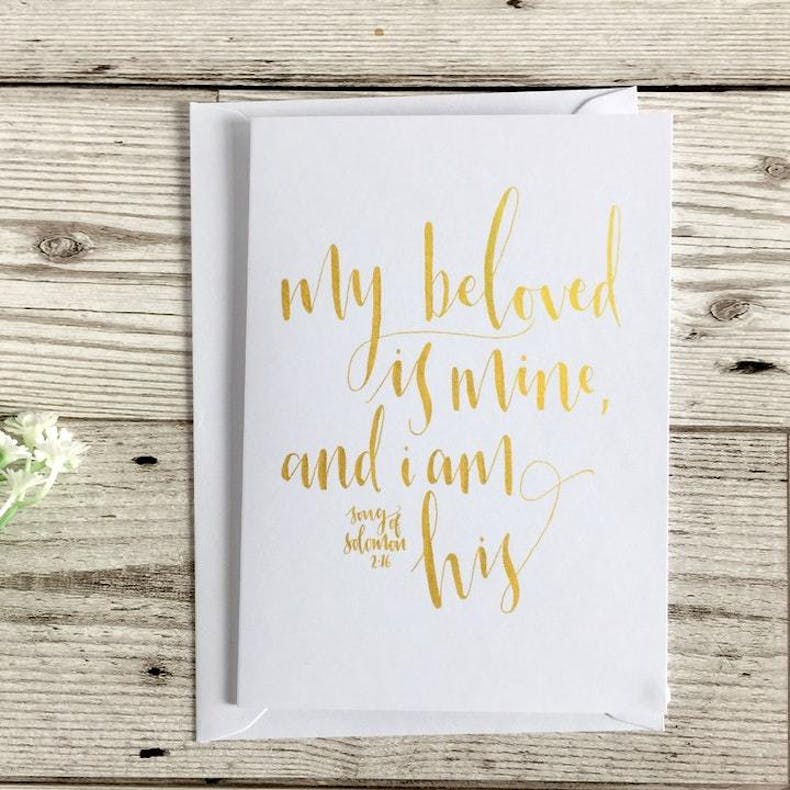 With ombre gold lettering on a luxury recycled card stock, this Christian Valentine's Day card is beautiful AND environmentally friendly. It features the verse from Song of Solomon 2:16 which reads "My beloved is mine, and I am his." and is a popular choice for couples, be it as a wedding card, an anniversary card, or a birthday card (it's blank inside for your own poetic musings).

Find it here: My Beloved Is Mine Valentine's Day Card, £2 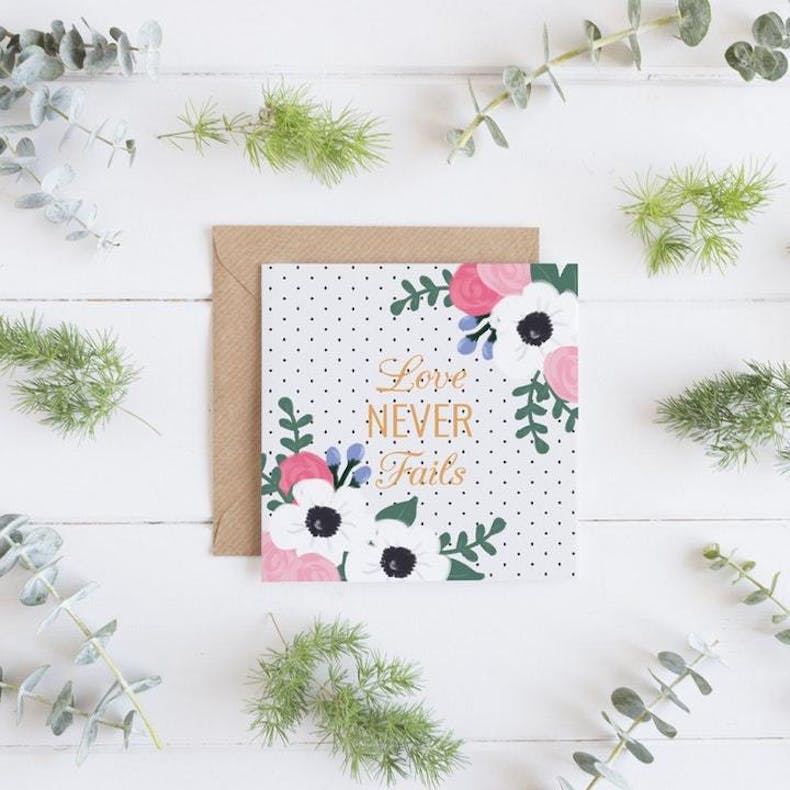 This lovely design is perfect for anyone who loves a good polka dot (although really, who doesn't?!) and features the classic "Love never fails" quote alongside some beautifully illustrated flowers in pinks, blues, green, and white. It's a luxury square card, and it's blank inside, so there's plenty of room for you to write an encouraging letter to your loved one. 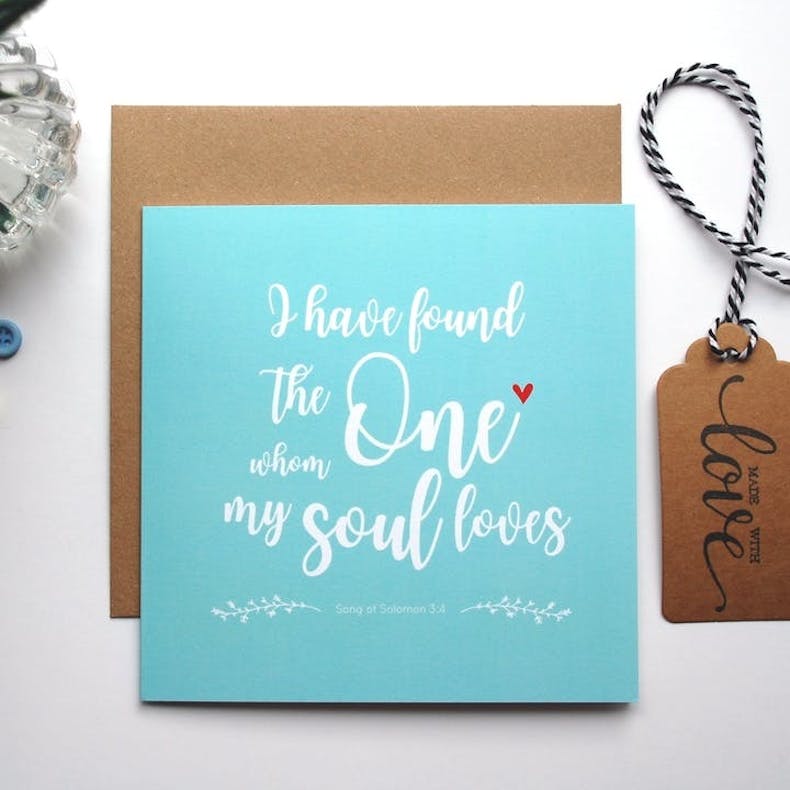 This happy shade of teal is a lovely way to cut through all the pink and red you typically see at Valentine's Day. Designed by Ann from Wonderful Prints, this square card features Song of Solomon 3:4 which reads "I have found the one whom my soul loves." 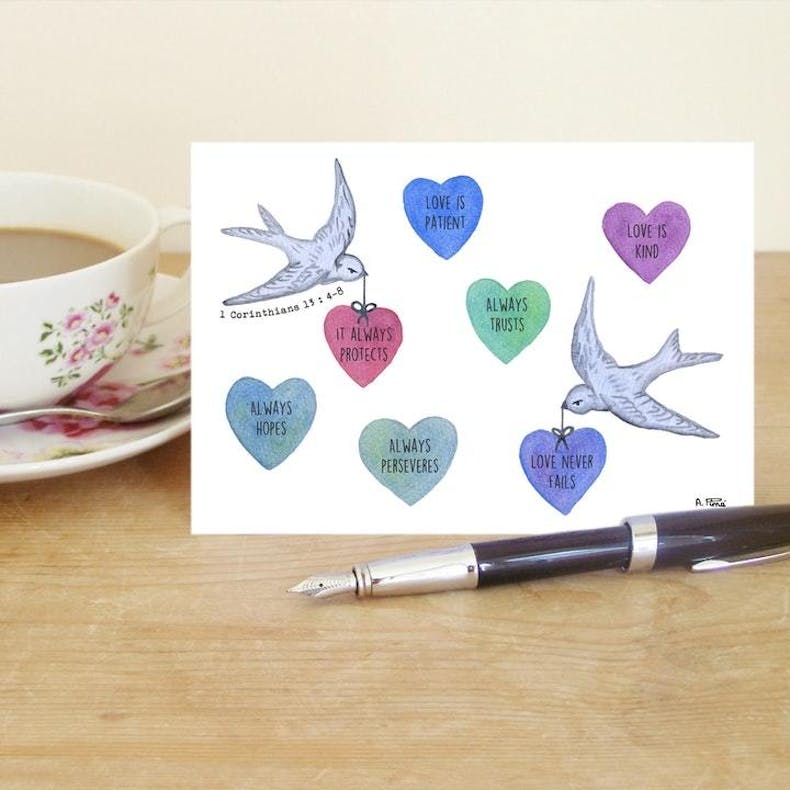 Alice from Alice and the Mustard Seed is always delighting us with her watercolour designs of popular Bible verses, and this 1 Corinthians 13:4-8 design is no different. Instead of focusing on the "Love never fails" phrase, Alice has decided to feature all of the qualities of love mentioned in the passage by creating a beautiful scene inspired by love birds. 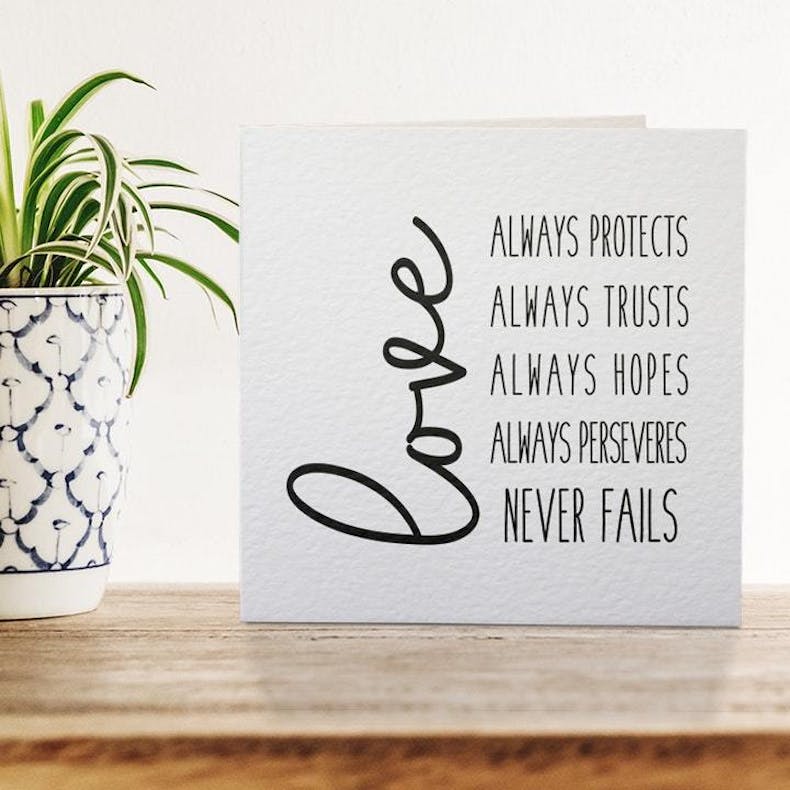 This modern design by Bow and Arrow UK features contemporary lettering in a monochrome colour palette. Printed onto textured card, the design has a luxury finish and is ideal for using as an encouragement card or friendship card as well as for anniversaries, weddings, and Valentine's Day! Jesus is Love personified, so when we read this passage, it's great to remember that it's speaking of everything He is. 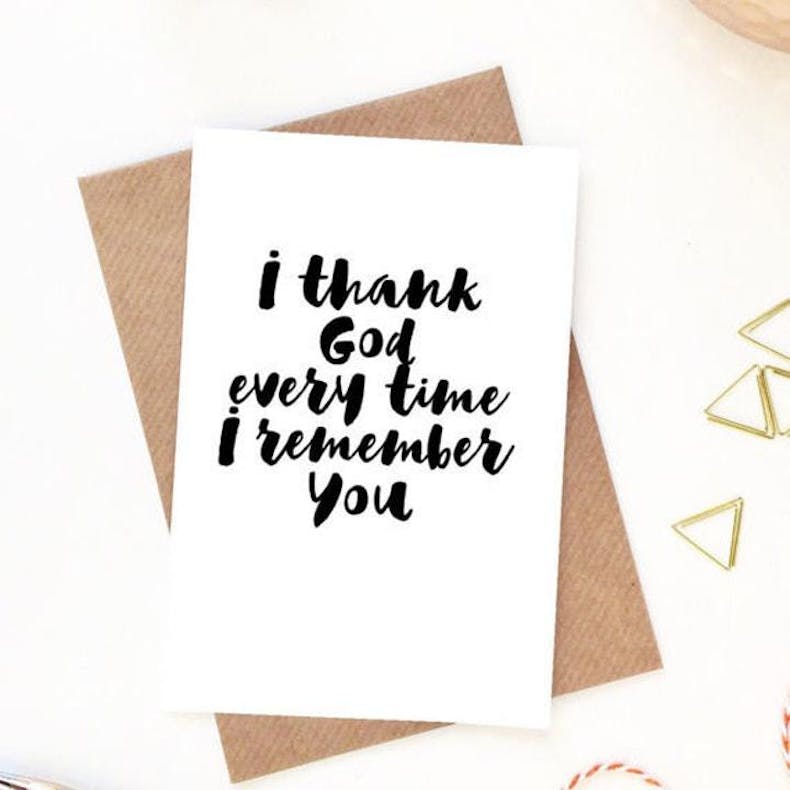 This postcard is such a wonderful way to encourage a friend. Using the words from Philippians 1:3 "I thank my God every time I remember you." this A6 postcard just needs a note adding to the back of it to provide a quick and easy encouragement for a loved one. It comes with a kraft envelope for posting it, which will enable your friend to frame it or pop it on the fridge without the raggedy edges postcards normally get.

It's also available as a pack of four encouragement postcards for £6. 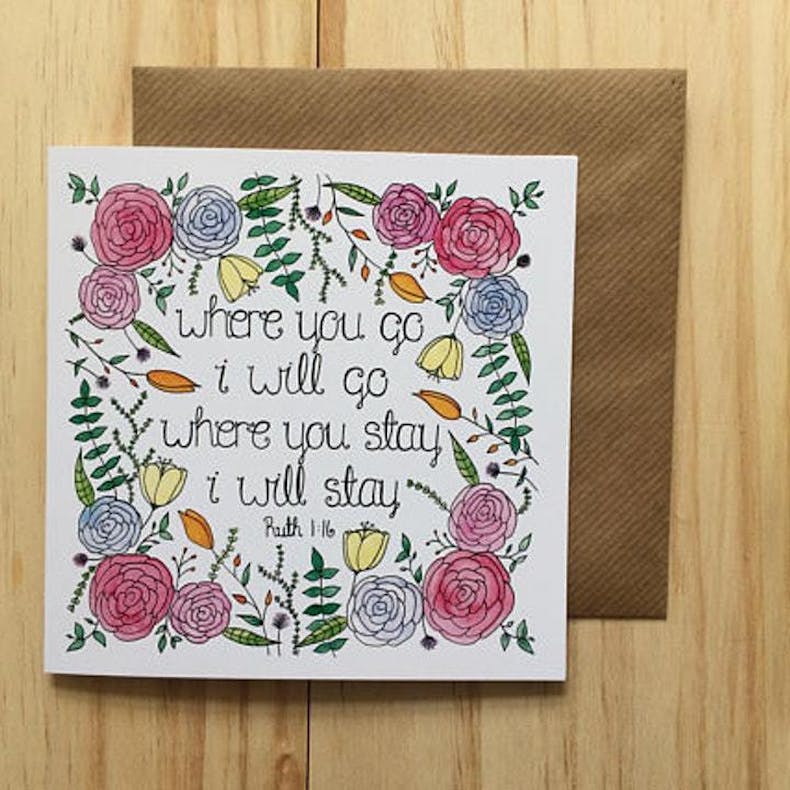 Often this verse from Ruth 1:16 is used with reference to marriage, but in the original context, it was actually used between Ruth and Naomi and is an indicator of the strong bond they had as women of God. So you could send this card as a Valentine's Day card to your significant other, but you could also send it to your female friends who support you and point you to Jesus as faithful women of God.

Whether you're single, dating, engaged, or married this Valentine's Day, use it as an excuse to share the love of Jesus with those around you. We don't need to feel depressed or despondent just because the culture around us is using Valentine's Day to celebrate romantic love -- we are never alone, because we are part of the Body of Christ. We are called to a life of devotion to Jesus, a life of pouring out His love to those we meet. So let's encourage each other no matter what our marital status may be!