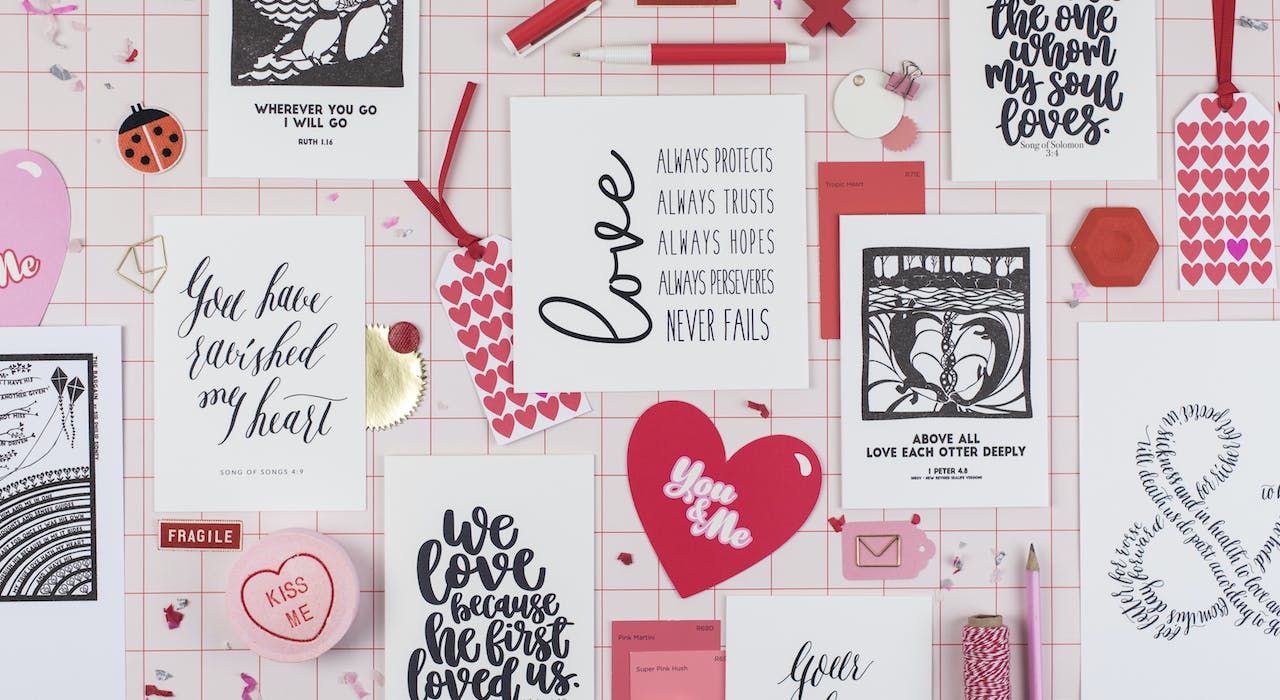 How did the day of St Valentine become a celebration of romantic love?

There are different rumours that have travelled down the ages, including one about a guy called Valentine who used to secretly marry Christian couples in the 3rd century, despite the orders of emperor Claudius to the contrary.

Another is of a fellow who was imprisoned for refusing to worship pagan gods, and who healed the sight of the jailer's daughter while he was in prison before being executed and leaving her a note signed "Your Valentine". An act certainly rooted in love, but not the soppy romantic kind.

I'm no historian, but it's interesting that despite its current form, February 14 is primarily associated with Christian saints - whatever rumour you choose!

Valentine's Day today is heavily associated with dating, romantic love, the colour red, and being in a relationship - it's been turned into a "romantic" festival by western capitalism really!

BUT before you think I'm the Scrooge of Valentine - that's not the case.

The feast of St Valentine is a "celebration of love and affection" - only one of the historical rumours involves romantic love (marrying Christian couples) but all of them involve martyrdom for the cross of Jesus.

So by all means, let's celebrate Valentine's Day - but it's not about your bae (necessarily). It's a celebration of love - and in whom do we see love personified? Jesus! The Bridegroom, the One, the Lover of our souls.

This Valentine's Day, let's look to Jesus and think about ways we can demonstrate His love to the people around us - after all, that's what St Valentine would do.

Sure, send your boyfriend, girlfriend, husband, or wife a card (lots of the cards on here are perfect for that) - but think about someone you know who could use a reminder of the love of God, and send them a card too. Let them know they are loved deeply by the King of the universe, that their future is safe with Him, and that they can rest in the arms of the Bridegroom.

The verse from Song of Solomon 3:4 reads "I have found the one whom my soul loves." and has been beautifully hand-lettered by Liz from Izzy and Pop for this monochrome design.

We use this verse a lot for our significant others, but it's firstly true of Jesus - He loves the church with His entirety, and He is the One our souls should love to be truly fulfilled. 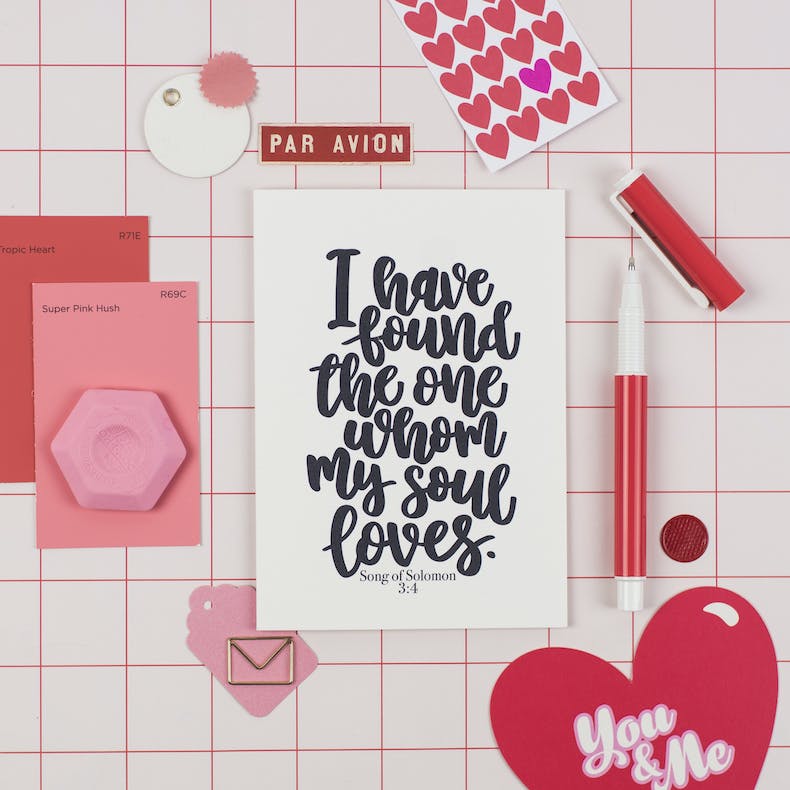 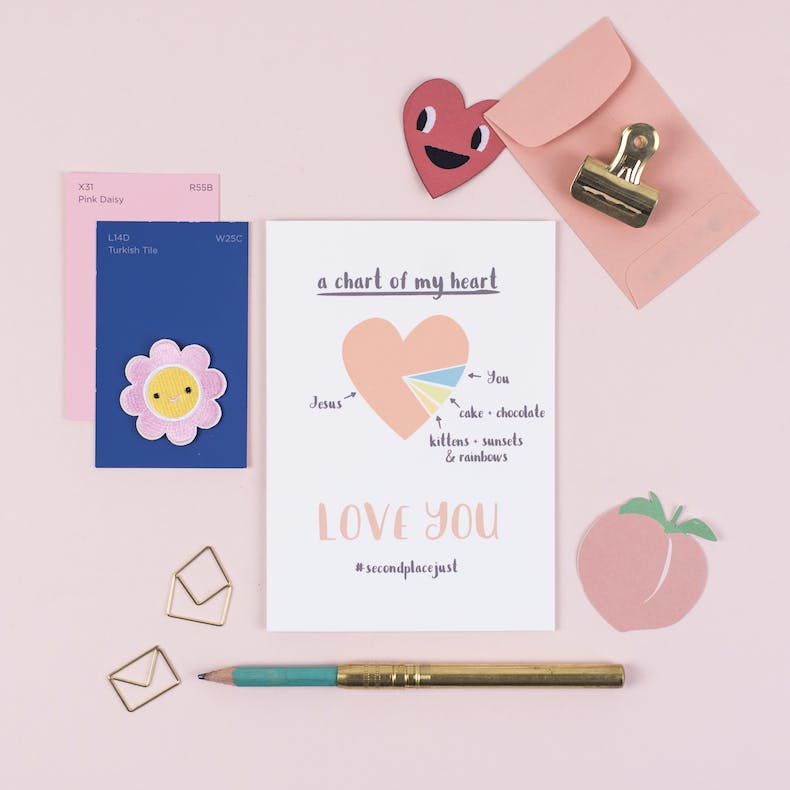 This sweet design by Rob and Naomi at Frog and Gnome is a top contender for my personal Card of the Month - it's so lovely! Featuring a heart design, it's been made into a pie chart where loving Jesus is the biggest chunk followed by a cute second-place section for "you" (i.e. your loved one).

This gorgeous card features a papercut design inspired by 1 Corinthians 13:4-8. It's handmade - so Karen from Kiwi Tree Design creates each one individually! The papercut is then adhered to a luxury kraft card, so it has a lovely texture and is perfect for sending someone a loving message. It's also great for weddings, engagements, and anniversaries! 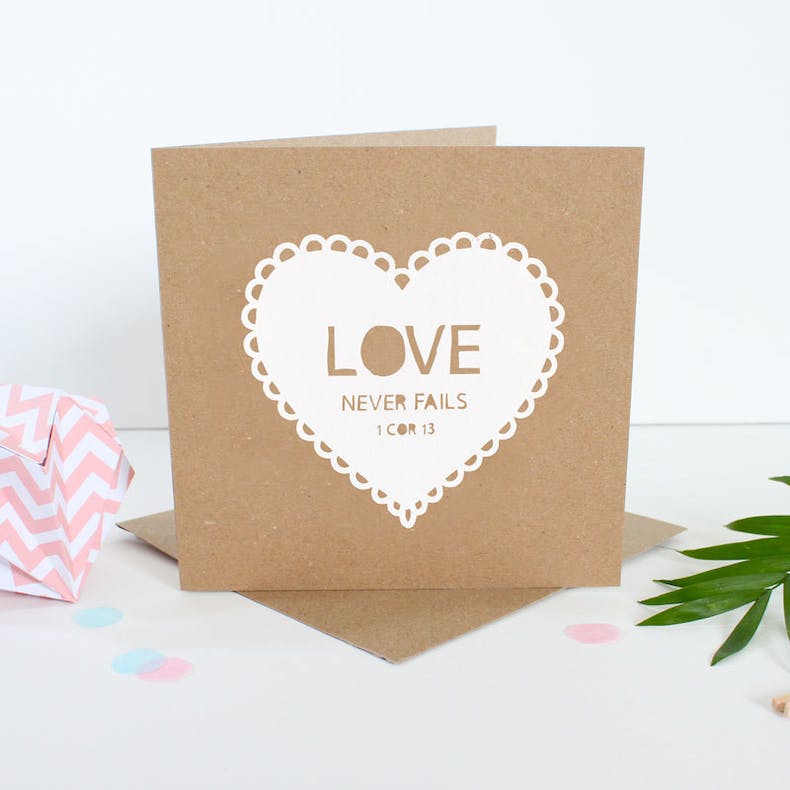 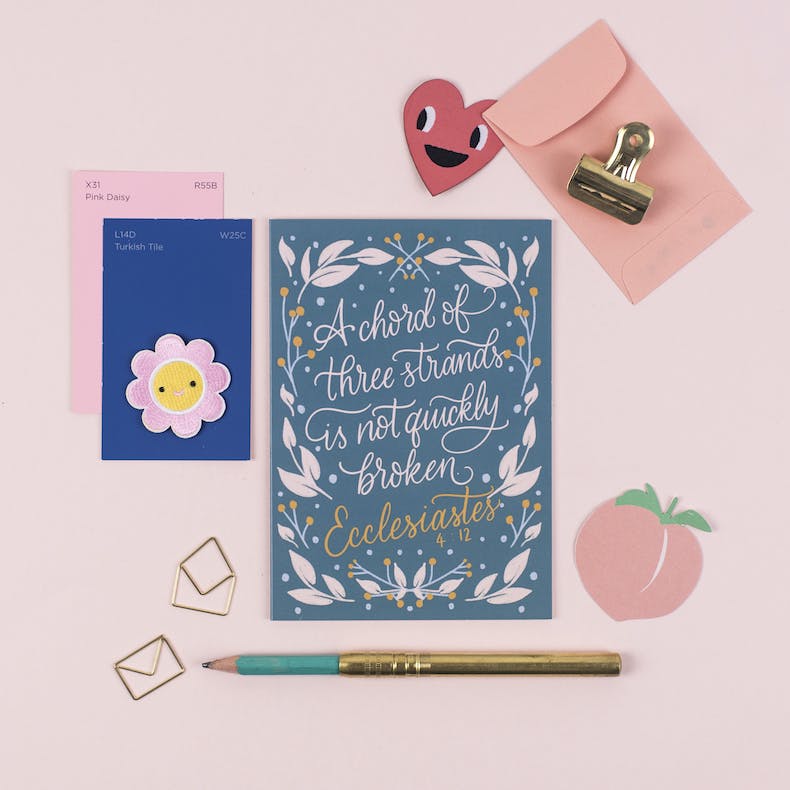 This typographic Bible verse design is inspired by Ecclesiastes 4:12 in a muted colour palette of navy and pale pink with pops of orange. The verse is often used as a reminder of our unity with Christ. It's a beautiful verse, and a lovely card! 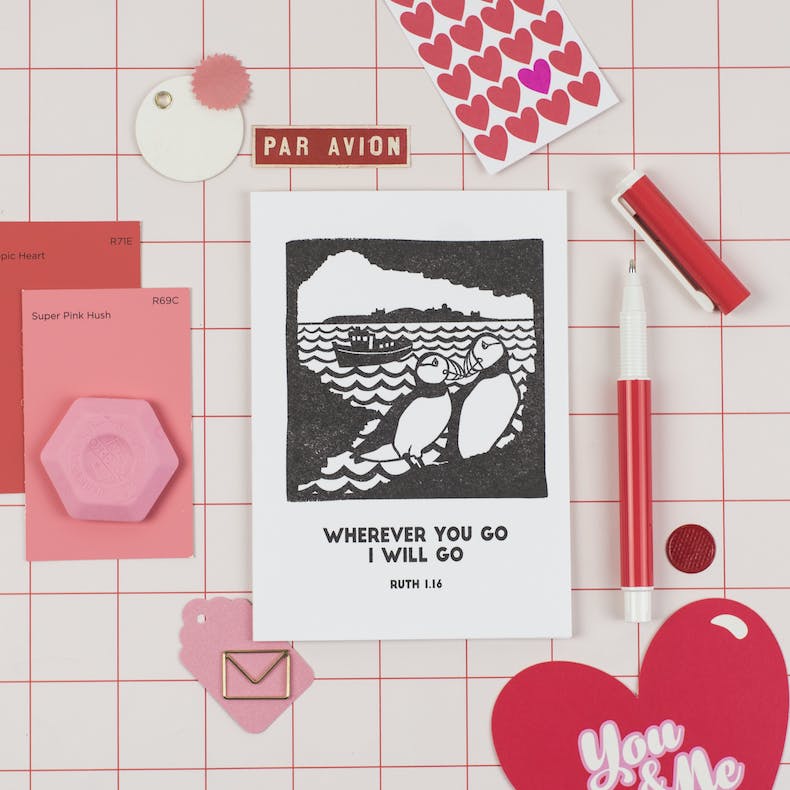 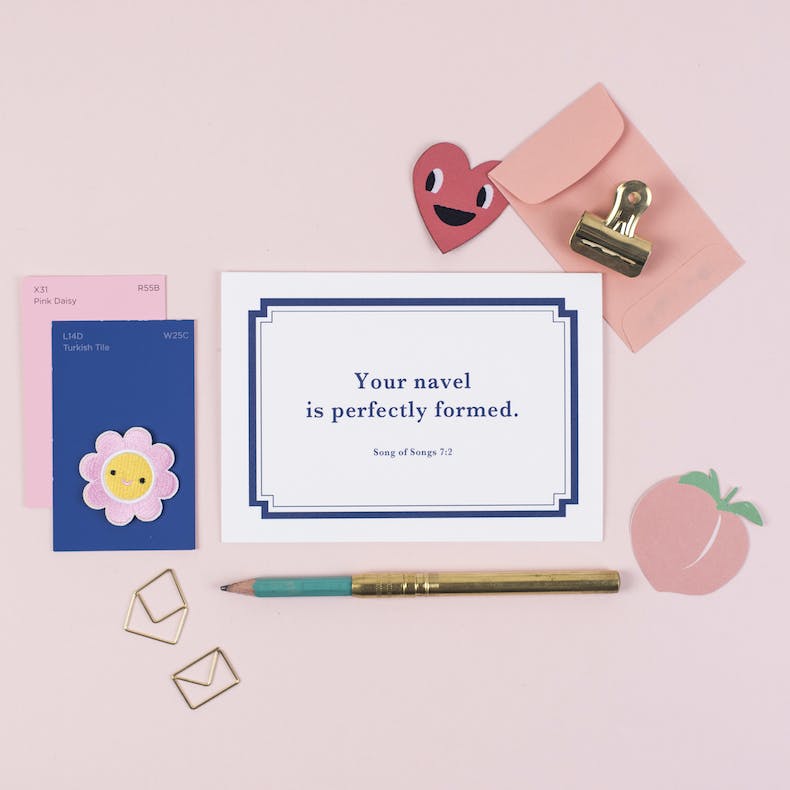 This one made me snort with laughter the first time I saw it - as many of you know, I'm a sucker for a biblical compliment! Hilary from Chassy Calligraphy has taken Song of Solomon 7:2 and made it into a hilariously funny Valentine's Day card for your boo.

This 1 Corinthians 13 card is really popular for weddings, anniversaries, and other occasions that celebrate love through the year. Taking words from the famous passage in 1 Corinthians 13 (who is the epitome of all these things? Jesus!), Faith has created a monochrome typographic design that will look great on your mantelpiece all year round. 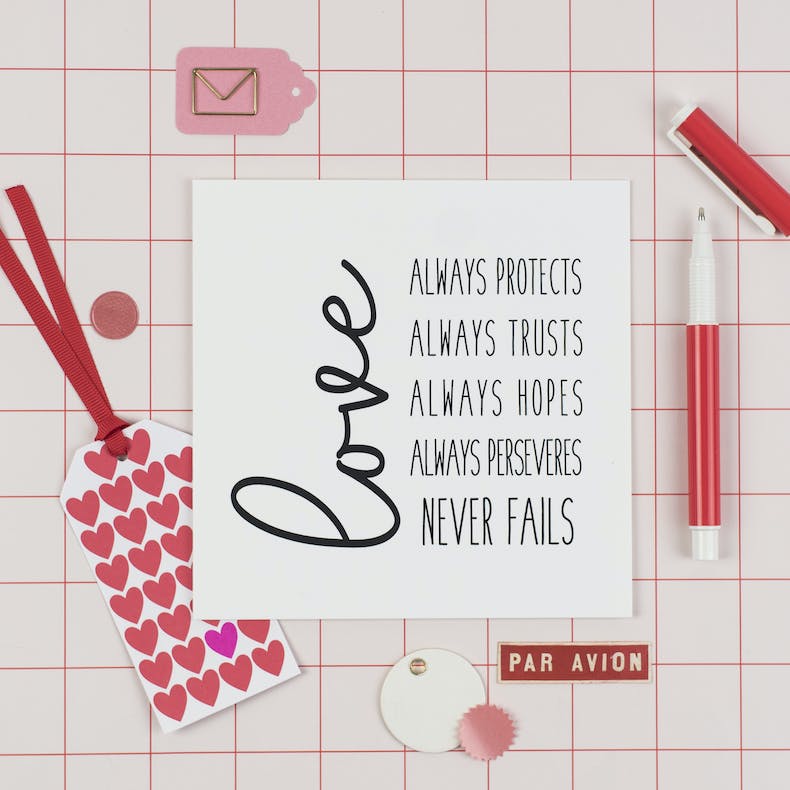 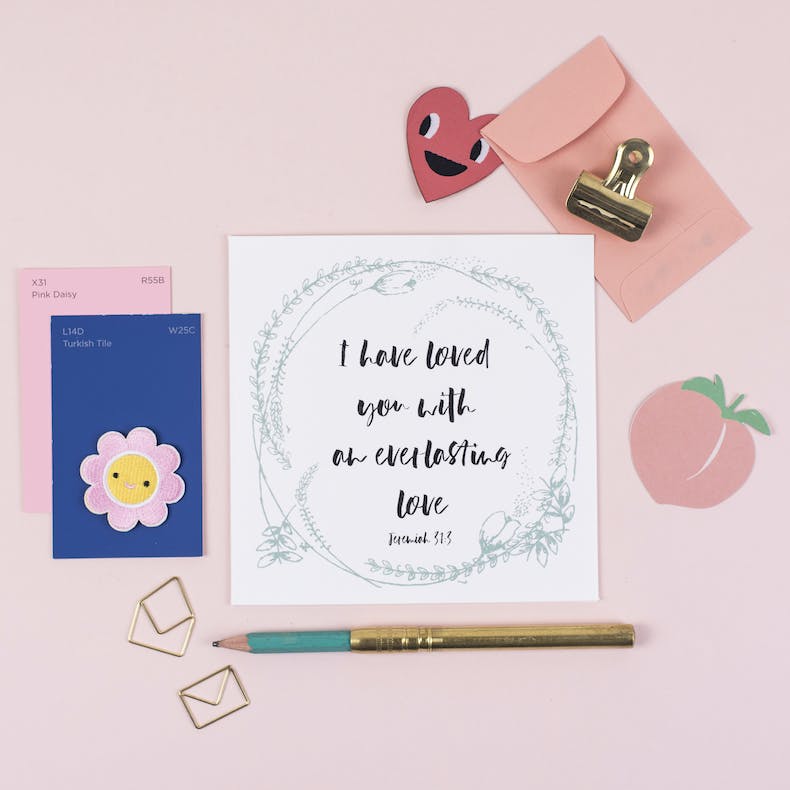 This gorgeous card from Christian Lettering Company is the perfect reminder that the Living God loves us. Featuring the words from Jeremiah 31:3 - "I have loved you with an everlasting love" in modern calligraphy, the circular wreath design reminds us of the everlasting nature of God's love.

Hilary from Chassy Calligraphy has penned the words of Song of Solomon 4:9 in modern calligraphy, creating the perfect card to express all those heartfelt emotions. 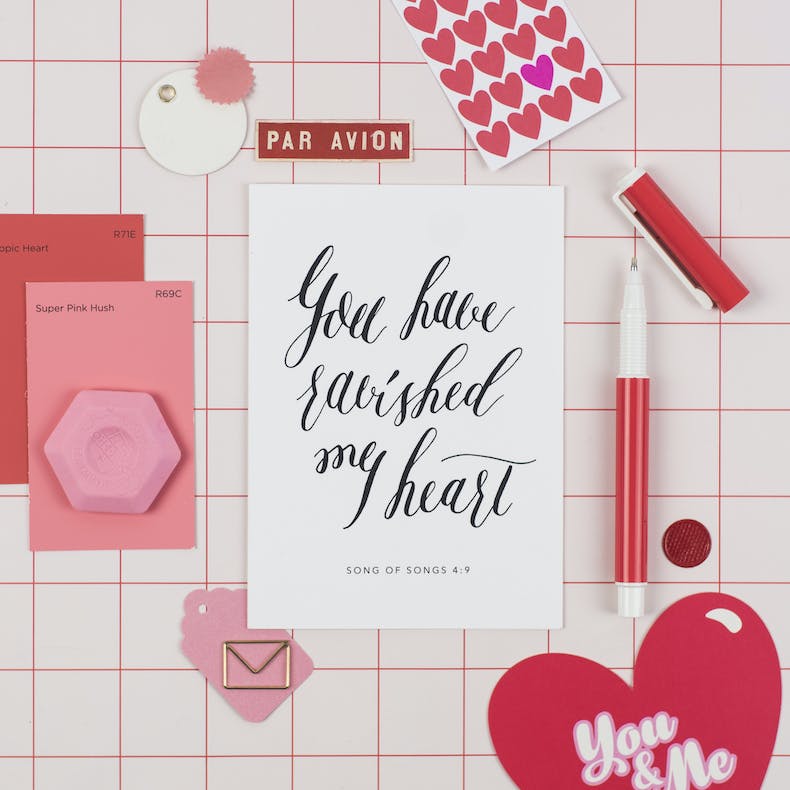 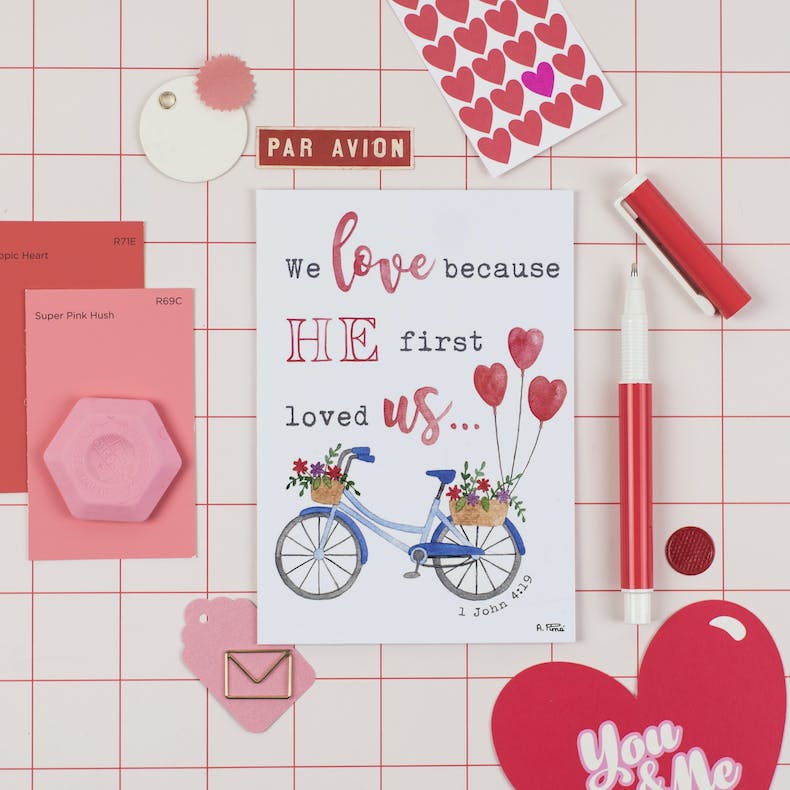 Alice's iconic watercolour designs are wildly popular, and this beautiful design is no exception! Perfect for many occasions, the words from 1 John 4:19 are accompanied by a beautiful blue bicycle and some heart-shaped balloons.

Lots of Alice's designs are perfect for Valentine's Day, including a new card which is a mash-up of Lovehearts sweets and 1 Corinthians 13! 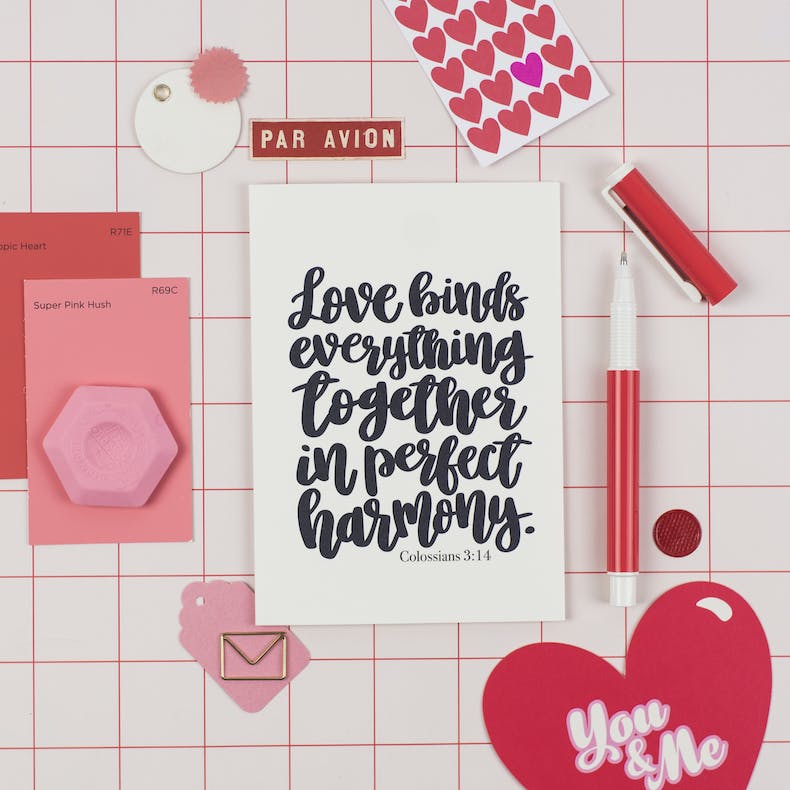 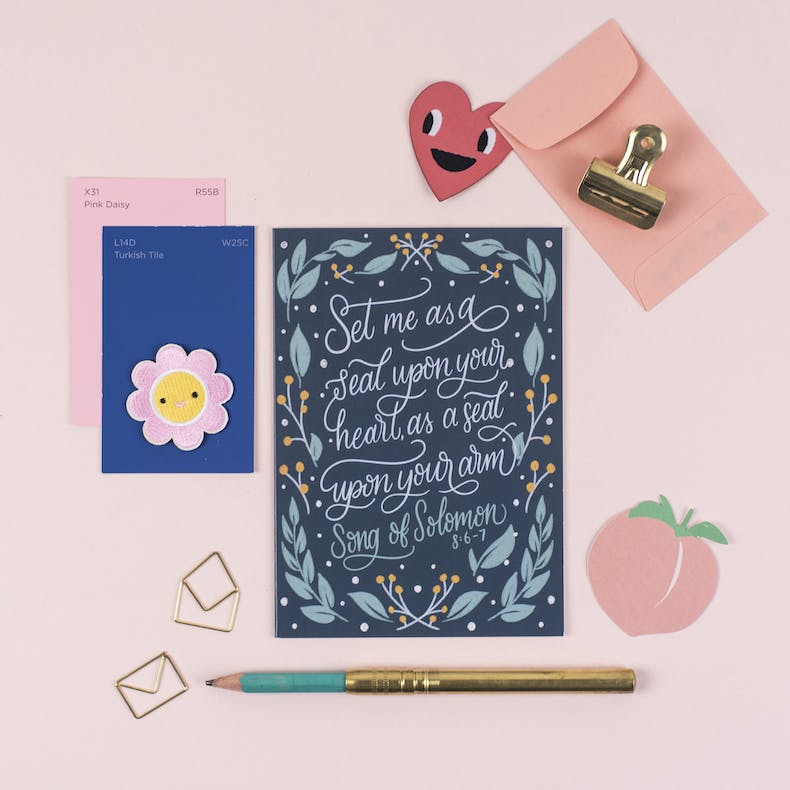 Otters miiiiiight be the cutest of all the wildlife, with many-a viral video in honour of their sweet natures. Rob and Naomi from Frog and Gnome have created this gorgeous monochrome card inspired by linocut design, featuring an otter-inspired version of 1 Peter 4:8 (perfect for those pun-loving pals!) - above all, love each otter deeply! 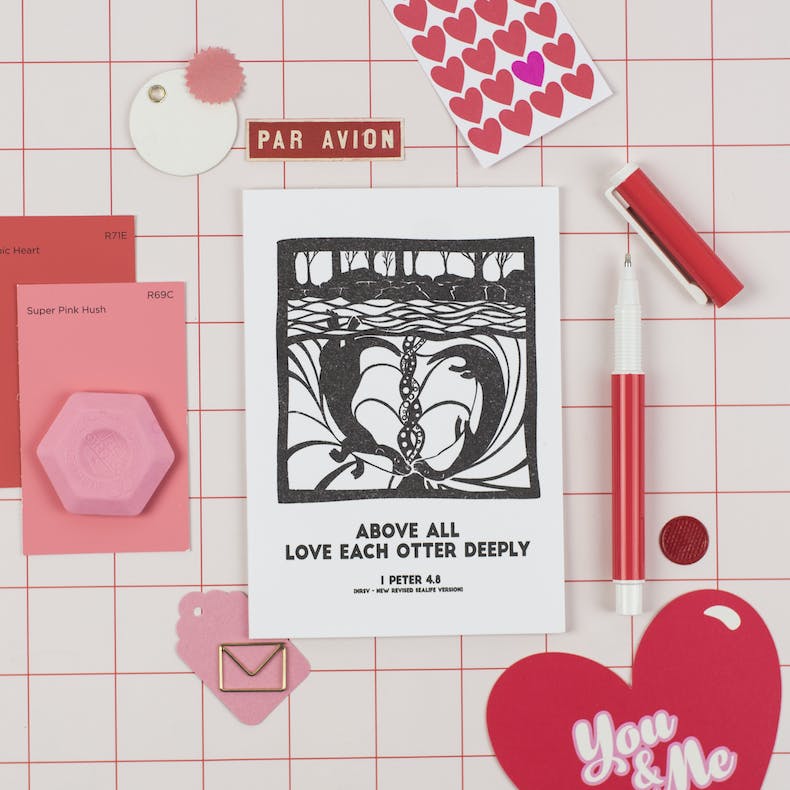 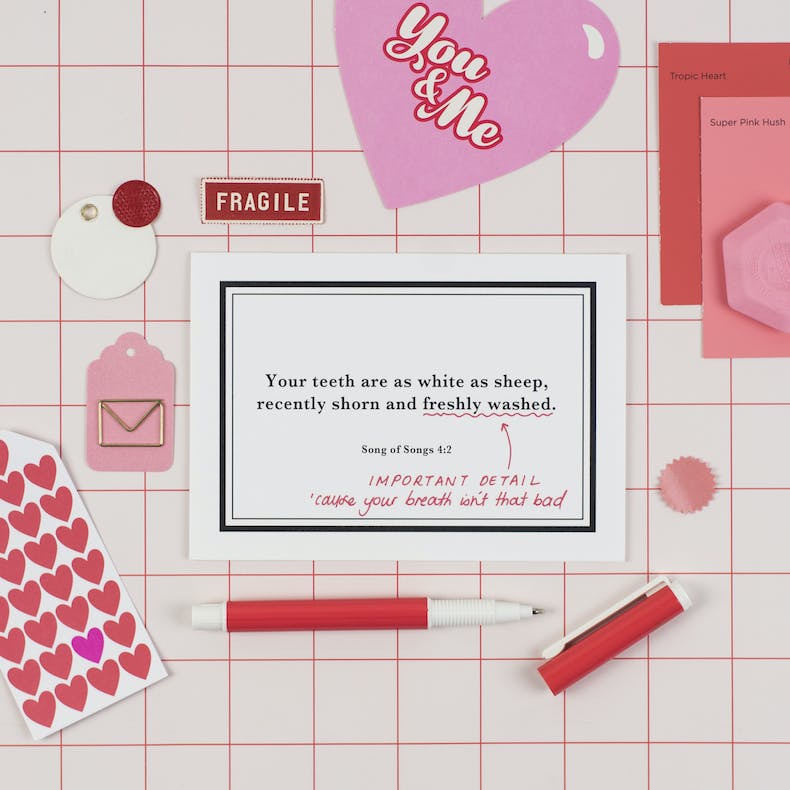 Are you ready for the mega lolz? Another Biblical compliment card, this time with added commentary! Hilary has taken Song of Solomon 4:2, which reads "Your teeth are as white as sheep, recently shorn and freshly washed." with the note that the "freshly washed" bit is important 'cause your loved one's breath isn't that bad!

Who do you love enough to tell them that their smile is like a flock of naked sheep?

A more classic Christian Valentine's Day card, this design (also by Hilary at Chassy Calligraphy) features the words "Your love delights me" taken from Song of Solomon 4:10. It's also great for giving as an anniversary card! 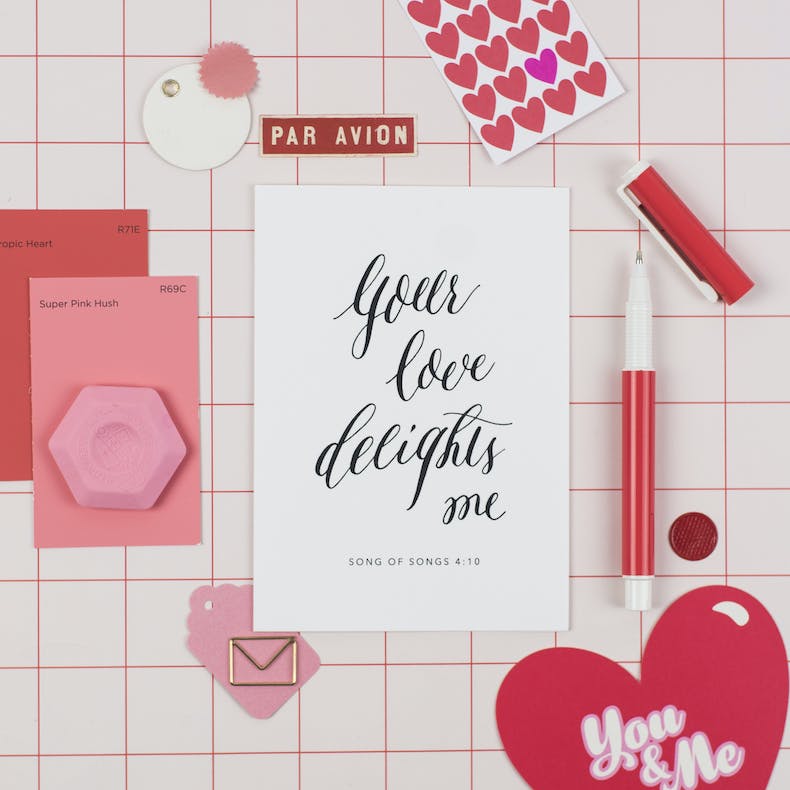 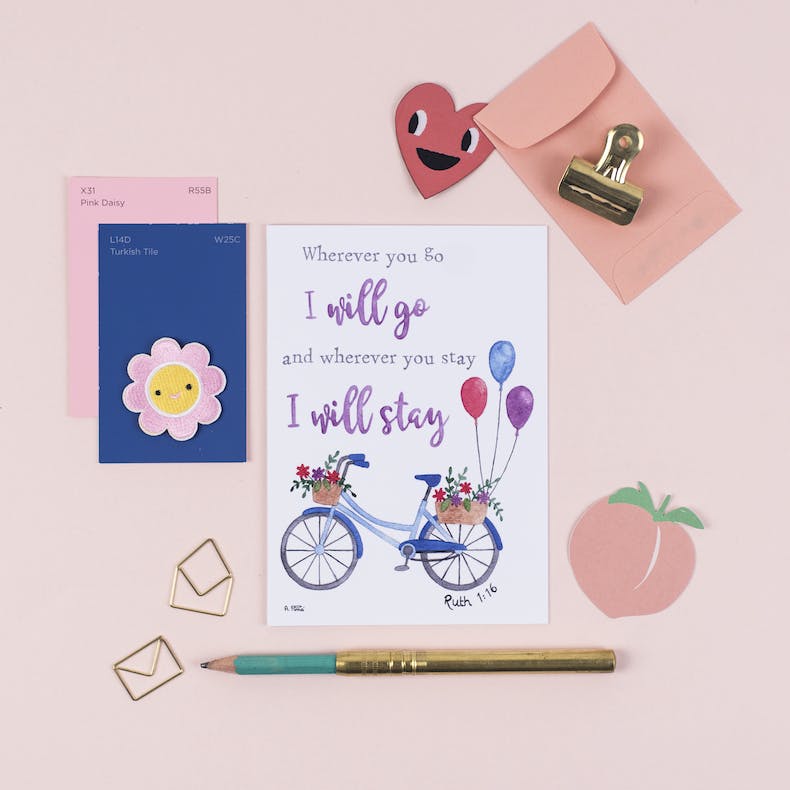 This version of Alice's iconic bicycle artwork has the beautiful text from Ruth 1:16 and the wording "Wherever you go, I will go, and wherever you stay, I will stay." This is a particularly meaningful one for you fellow ministry families out there!

Liz's stunning brush lettering is the main event on this monochrome Valentine's Day card by Izzy and Pop. Featuring one of my favourite verses, 1 John 4:19, it reads "We love because He first loved us."

This card would look gorgeous framed on your wall after the event, too! 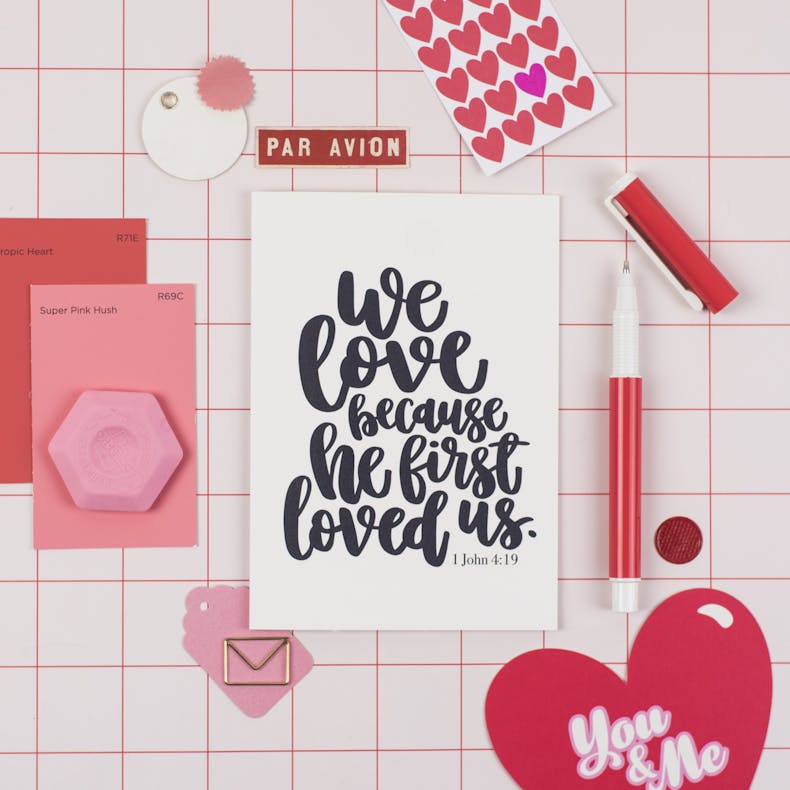 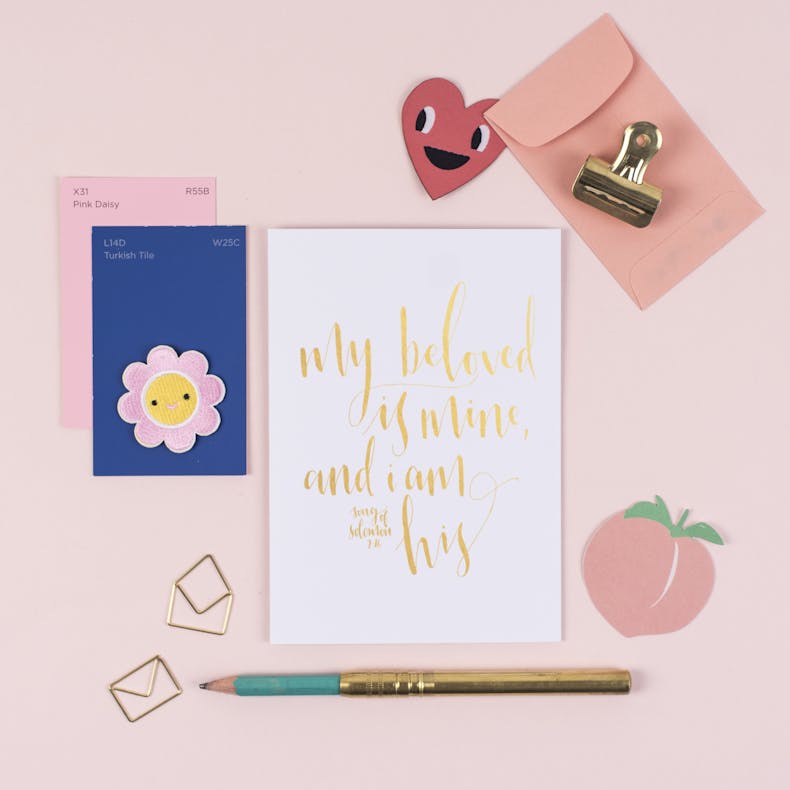 And last, but certainly not least, we have this beautiful Valentine's Day card by Christian Lettering Company!

This budget-friendly version is only £3, and is an affordable alternative to hot foil printing. It features the words of Song of Solomon 2:16, which read "My Beloved is mine, and I am His." and would be a great reminder to your friends - Jesus is our Beloved, our Brother, our Friend, and our King - and He is ours, and we are His.

[Editor: all links and prices were updated in January 2021 to make sure everything is still available]